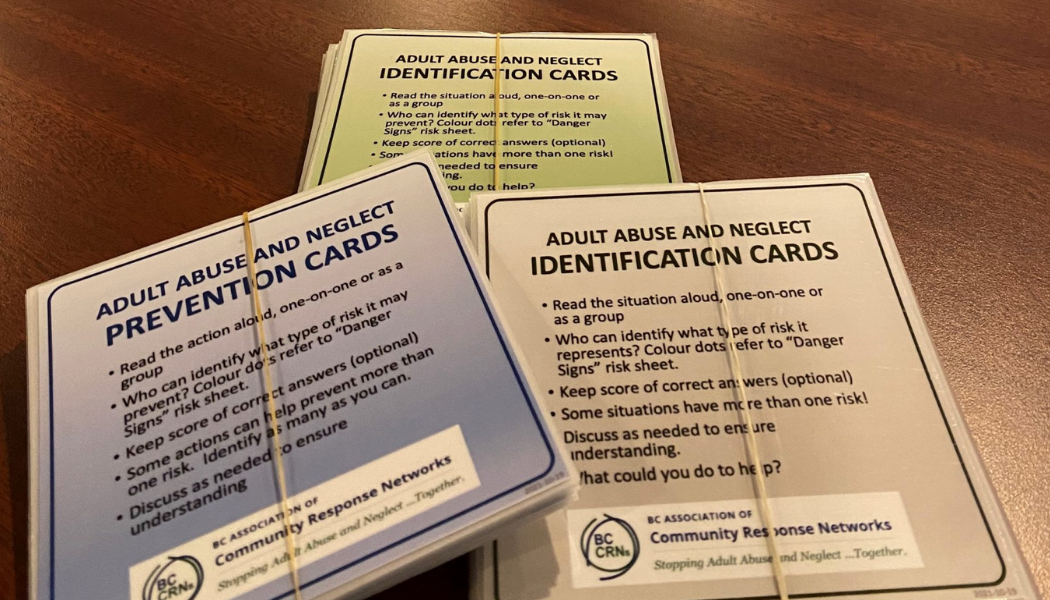 Think about the last time you made yourself a cup of tea, or when you were offered one. Reflect on this moment: Who were you with? What did you feel? What stories come to mind?

Tea culture and tea history cross countries, with each pot, carafe, cup, and glass catalyzing a conversation, a connection, and, in some cases, a relationship.

The theme of tea also brought about a pilot project for the multicultural, intergenerational, and multi-agency Abbotsford Community Response Network (CRN) that engaged the community’s seniors in conversations about adult abuse and neglect.

The Abbotsford CRN team are:

Tea and Talk is an Abbotsford CRN project that arose out of the impact of pandemic isolation. Regular Tea and Talk events are also part of a larger seniors’ social prescribing program led by Josh and Archway’s Senior’s Community Connector Jada Onigbinde. The idea was to leverage this event to share information on abuse and neglect prevention directly with seniors who drop in and who regularly show up to socialize.

The next step was figuring out how to safely have these conversations.

Learning from Other CRNs, Collaborating on Design

Discussions about engaging seniors more deeply about adult abuse, neglect, and self-neglect started well before the pandemic in 2019.

Devirani consulted with colleague Marian Anderberg, Regional Mentor – Thompson, Nicola, Shuswap and Columbia, where a CRN in her region gamified their communication and outreach, developing a BINGO-type of activity that encouraged participation and learning.

With the gamification concept in mind, the Abbotsford CRN team played with the idea of a card game that would include fictitious scenarios, simple activities, and probing questions, to help volunteers, caregivers, and service providers safely facilitate discussions on adult abuse, neglect, and self-neglect, their signs, and their risk factors.

The goal was to develop a tool that was universal, easy to use, easy to share, adaptable, and complementary to existing community programming, like Archway’s Tea and Talk and BC CRN’s It’s Not Right!

Starting in the Summer of 2021, the team planned and developed the concept further, pouring over design elements, the language used, and the possible applications of the tool. Once the cards were ready, Archway set aside one of their bi-weekly Tea and Talk events to pilot their use with seniors in October 2021.

Jada and CRN team members Patti and Prabhjot each facilitated a group of six seniors, who ranged in age from 60 to 80, engaging the participants in dialogue about adult abuse, neglect, and self-neglect over hot cups of tea.

The Impact of the Pilot

The familiarity of the Tea and Talk format helped participants feel safe, which is critical when discussing the topic of abuse and neglect.

The hands-on, in-person format helped seniors with learning and retaining important information about abuse and neglect, while the facilitators were able to learn even more about the people they support and serve in the community.

CRN team members were also impressed by how open the seniors were to talking about abuse, neglect, and self-neglect situations they personally lived through.

“There was a keen interest in sharing, analyzing problems, solving those problems, and learning about the resources available to the community that could improve an abusive situation,” says Patti.

“This pilot shows there is strength in community. People can rely on more than the resource providers and workers: we can lean into each other, our personal experiences, and the experiences of the larger group for support,” adds Josh.

Pilot Success Leading to Expansion to Other Abbotsford Community Groups

The success of the pilot now has the team planning additional Tea and Talk type events to use the cards with other groups of people.

Deirdre is looking to test the cards with her clientele at the Abbotsford Association for Healthy Aging. “Our clients identify as either a caregiver or a senior and are 50 years and older,” she says.

Patti’s organization, the Mennonite Central Committee, has a volunteer roster of 1,100 people where approximately 800 are over 60 years of age. She has ideas on how to pilot the application of these cards with the volunteers.

As a pre-social work student, Prabhjot is looking to test the cards with her peers and to explore how the cards, once translated, can be integrated into conversations with the Indo-Canadian community in Abbotsford.

“In addition to being able to learn from other CRNs and be creative with how we reach seniors, I think our biggest success was our collaborative partnership,” says Devirani. “Despite each of us having a lot on our plates, distinct priorities to focus on, and different challenges to manage, our common goal to be inclusive, intergenerational, and thoughtful in the kind of impact we wanted to leave in the community brought us together. We co-created something that has the potential to support communities of many cultures across generations.”

Join our mailing list and get updates on the latest programs, news, and upcoming events in the CRNs across BC

© BC CRNs. All rights reserved. Privacy Policy
Registered Charity#: 89342 3400 RR0001
We acknowledge the financial support of the Province of British Columbia